Whatever your industry, there are three best practices you can follow when analyzing your payment card fees.

The merchant card industry is changing, so much so that even the word “merchant” has become out-of-date. In recent years, the industry standard verbiage changed from merchant cards to payment cards to be all-inclusive of the complexities of the payment card world. Examples of payment cards can include traditional credit and debit cards, but also gift cards (closed loop), pre-paid cards (open loop), ghost, and virtual cards.

Why is the payment card industry so complex?

First, the number of players involved in these transactions has increased.

Second, the terms of contracts can be very vague and the monthly statements are even more confusing. Often times a merchant receives a statement that is multiple pages long and includes an excessive amount of statement details. Generally, the statement does not clearly identify each charge, the numerous players involved, and the fee each player receives from the transaction. Additionally, understanding your processor/acquirer structure is difficult.

The players and process

The players that touch each transaction are numerous. These can include obvious players such as cardholders, issuers, merchants, and card networks. In addition, there are less obvious players that are operating behind the scenes: acquirers, processors, merchant services providers, gateways, independent software vendors, and other application service providers.

Intermediaries can play more than one role, and they often do; intermediaries are e-wallet platforms, merchant processor, mobile point of sale (POS) providers, merchant acquirers, third-party processors, POS terminal vendors, integrated system providers, online providers, and fraud control providers. What we see in the market is that the major players, in efforts to become more vertically integrated and expand their reach, are merging or acquiring many of these intermediaries.

The below graphic shows just how complex the process can be and how many players can be involved. Each one of these players can charge a fee for their involvement in the process that the merchant pays for in the end. 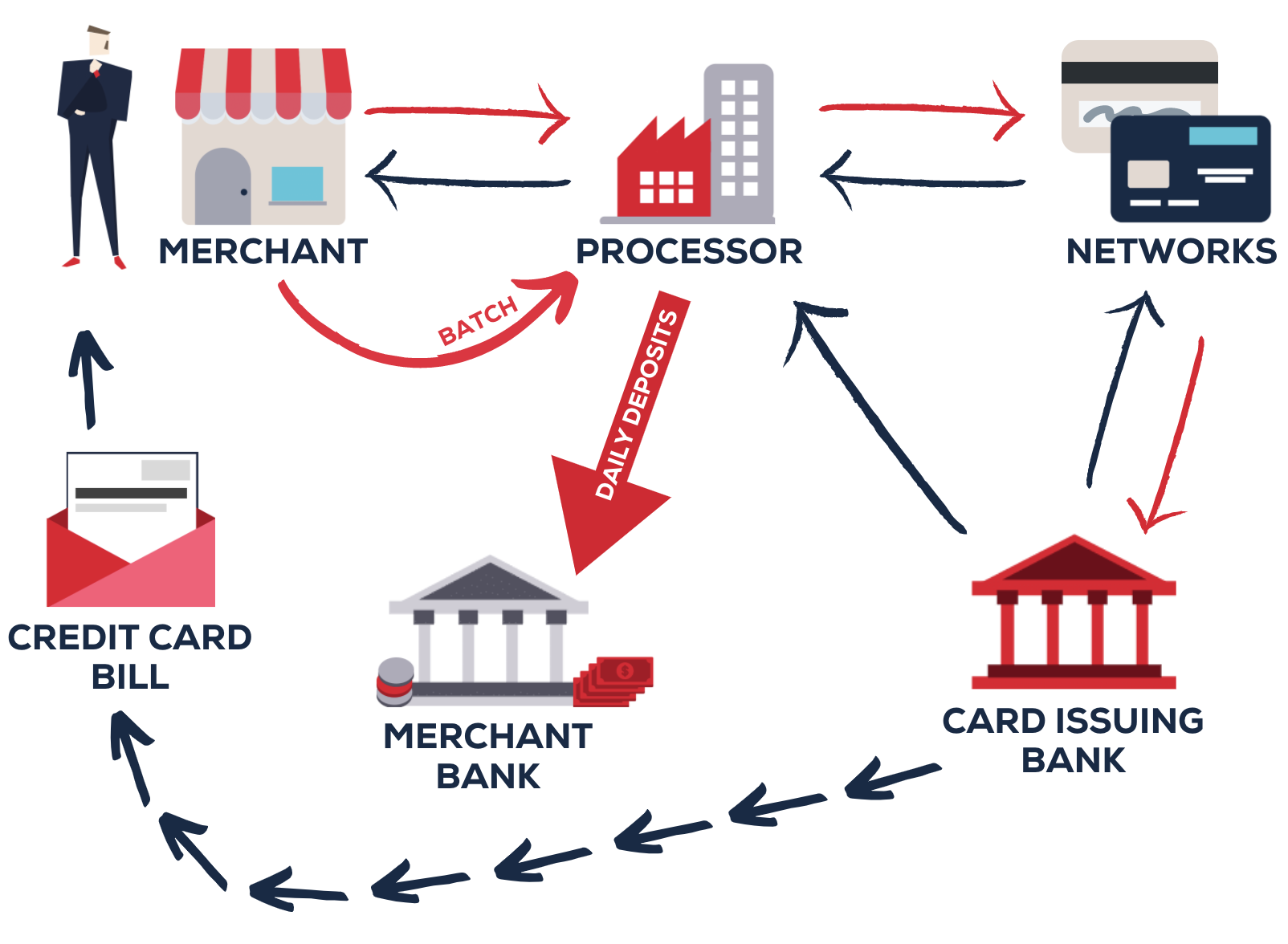 There is no way to get around the fees or the process when accepting payment cards; however, there are best practices you can follow when analyzing your payment card fees:

Do you know if your total effective rate is all-inclusive, or is the interchange fee separated out? Most of the time, this rate does not include your interchange fee and in these cases, you end up paying an additional fee per transaction.

Interchange fees are the largest component of merchant fees and can account for nearly 80-90% of the total fees. It is important to ensure you are achieving optimal interchange fees. The remaining 10-20% of fees are split 80/20 between network assessments and dues and the processor/acquirer fees. Card networks sell their reliability and expanse to earn fees on every card transaction that flows on their global networks or “rails.”  For a merchant producing greater than $100 million in card sales, these network assessments and dues would account for about 8% of the total cost.

The remaining 2-4% of total fees are processor/acquirer fees. Although this is a relatively small portion of the overall fees, they can quickly add up, especially when looking at the fees over several months.

Break down your costs

Oftentimes it is easy to understand your contracted transaction fees. However, once you factor in interchange fees, network fees, and any additional fees, you can see how the effective rate can differ from your contracted rate.

Do you know your true costs for your transaction fees, interchange fees, network fees, and additional/miscellaneous fees? Do they match your contracted terms?

It is important to understand and manage these best practices. If you are not sure where to start, contact us to start a conversation.

Editor’s note: This post was originally published on March 5, 2019, and was updated on April 2, 2020, to reflect the latest information on industry best practices.