The mid-summer announcement of the potential abandonment of LIBOR indices by the end of 2021 is raising concerns among both banks and companies. The primary question is the relevance of the new benchmark rates, writes Muriel Nahmias.

The mid-summer announcement of the potential abandonment of LIBOR indices by the end of 2021 is raising concerns among both banks and companies. On July 27, Andrew Bailey, chairman of the Financial Conduct Authority (FCA), the agency that has supervised LIBOR since April 2013, called for the replacement of the series of money market benchmark rates in the major international currencies (USD, GBP, JPY, CHF and, to a lesser extent, EUR). Deeming it essential to prepare without delay for the transition to more sustainable and credible indices, the UK regulator was careful not to deliver its guidelines. The replacement project is risky, from both an operational and a legal standpoint.

Last June, the Alternative Reference Rates Committee (ARRC), under the auspices of the US Federal Reserve, submitted for comments a proposal to replace the USD LIBOR by establishing three new rate references based on repo transactions secured by US Treasuries (T-Bills and T-Notes). Last spring, the Risk Free Rate Working Group in the UK voted in favor of SONIA for sterling derivatives.

The primary question is the relevance of the new benchmark rates. The proposal is to replace indices calculated using declarations from contributing banks with indices calculated on actual transactions. The advisability of choosing “unsecured” indices – reflecting a rate where the parties lend to one another without collateral – over “secured” indices is more questionable. In addition, neither the EONIA nor the SONIA indices solve the problem of terms. Finally, while the US repo market is enormously deep and consists of homogeneous securities, the euro market does not possess the same qualities.

There has been no official reaction as yet in the eurozone regarding the future of the Euribor. However, as with the LIBOR, the reliability of the index attracts criticism due to its declarative nature. In response, the banks document their contributions to the panel on a daily basis. The “Euribor+” project, which has been under consideration as a replacement, has not proved satisfactory to date. As a result of an unsecured interbank market no longer deemed active enough, index tests based on actual transactions have revealed a lack of regularity and reliability.

The same is true for the LIBOR, for which the Chairman of the FCA cites the example of a currency/maturity published each day using contributions from a dozen or so banks that had executed only 15 transactions of a sufficiently critical size over the whole year in 2016. Generally speaking, the lack of an active underlying market for both the LIBOR and Euribor, particularly on 12-month, 6-month and even 3-month maturities, seriously undermines the sustainability, even the relevance, of these indices to take over from current indices.

Since the interbank market no longer exists, other more “iconoclastic” ideas are now circulating. One example is based on the global short-term market, using an index that would incorporate all refinancing transactions (not only banking transactions, but also corporates).

Practically speaking, when it comes to financing contracts, in the event that the LIBOR indices are published more sporadically in the future, reference will be made to the principle of the rate determined by the Reference Banks or to the “cost of funds” clauses, which is obviously a danger to borrowers. The Loan Market Association (LMA) has yet to respond.

In the eyes of some market players, it is up to the public authorities to tackle the subject. In 1999, the success of the transition from PIBOR to Euribor was ensured thanks to a decision firmly imposed by the authorities. Today these same authorities would prefer to remain in the background. However, enforcement would still be the only way to ensure a transition free of legal risks.

The structural decline of the interbank market in a few graphs

90% of interbank transactions, both “unsecured” and “secured”, have a maximum maturity of 1 week. In 2003, 80% of transactions had a maturity greater than 1 month. 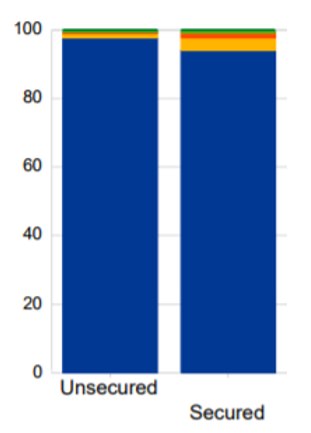 The repo market is slightly more efficient than the “unsecured” market 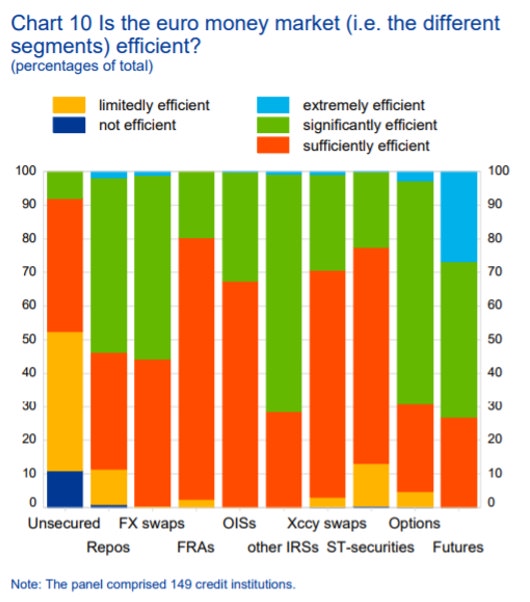